MY DEFINITION OF GHANA´S (IN) DEPENDENCE: 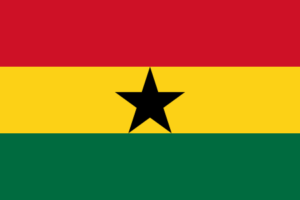 CALL IT THE BIRTH OF A NATION – DONT CALL IT INDEPENDENCE

This year 2017 GHANA is celeberating her 60th BIRTHDAY as well as:
ABOLISHING of colonialism on its SOIL .
STOPPING the european PARASITES from sucking her RICH RESOURCES.
Driving away the FOREIGNERS who had DEPENDED on her
RICH RESOURCES over 400 centuries long.
So who was dependeing on who?

GOLD COAST NEVER DEPENDED ON ANY COUNTRY
IT WAS THE OTHER WAY ROUND…………………….

THE LONG-AWAITED BAMBAARA ALBUM IS OUT NOW

THE LONG-AWAITED BAMBAARA ALBUM IS OUT NOW.
Check it out on following sites: 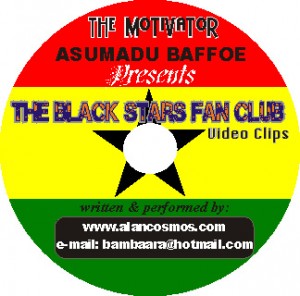 The Ultimate Football Hit for the Black Stars of Ghana (U21 World Champion in 1995 and 2010) is now online. Watch & get it free:
Go to TopAfric.com or YouTube or MySpace or this Site
Written & performed by Alan Bambaara Cosmos

Making of a Star 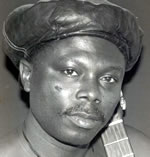 Just at the time his MOTHERLAND was proclaimed GHANA(formerly GOLD COAST) KWADJO ASUMADU BAFFOE saw the light of life.The first of 8 boys and 1 girl. Around the tender ages of two and three he would dance endlessly when his father with his uncles played their GUITAR,ACCORDION and PENPENSWA(a locally-made Kalimba-like instrument).They played their instruments and sung as well.His mother still sings with the local Adenkum group.A musical family.

As a native of NKWABEN-NKORANZA, the cocoa-rich farming areas of the Brong Ahafo Region, his father gave him a good elementary boarding school as well as a secondary-commercial education. At the Agogo Sec-Com.college he learnt to play the Guitar very fast. At the age of sixteen he already spoke many languages, played good theatre(Shakespeare etc),played the guitar and sang in various repetoires,ranging from Soul, Rock`n Roll,to Latin American.His popularity had begun.

This versatile charachter of him earned him the name `COSMOS` at campus.From now on he would jam with BANDS when he was on holidays, the PAlace Captains, Midnite Movers,Starlite, Unity Stars etc.In the early seventies he led the ELDORADOS BAND of the Aboso Glass Factory and recorded hits like `Fanfool Respect`,Africa monso mu,`Huhuuhu nye mehu`etc. A cross-over type of music even at that time.

At this time ALAN COSMOS instantly became a Teenage-Star.Specially loved by students and the youth. In his ambition to explore wider horizons(as he gave in an interview by one Danso Missah of Ghanaian Times) Alan moved his group to the Harbour City of Tema and formed the JEM MOVEMENT BAND of the newly opened Jem Nite Club.The Band toured Gambia and Senegal during the 1978 Independence celebrations.

Late in the same year his dream to travel overseas came true. SIR ALAN COSMOS(as he was affectionetly called) moved with his seven-piece band to settle in Germany. After some years stay in germany, he replaced some of the band members with three european musicians. Under the Band name UNIQUE they recorded the album `SANKOFA in 1983.The production was by Uwe Müller`s TPA Management under BOOTS RECORDS Label.Songs on that album included Àkua Afriyie`and `Tano Street`.

He now saw the necessity of using his African identity precisely and therefore changed to BAMBAARA SOUNDZ, meaning gigantic.Many call him Mr Bambaara. In 1984 he recorded the SUNSHINE MUSIC FOR YOUR PLEASURE album with songs like `Yeegu Nsa` `Fontonfrom`, and S o ca.The songs became instant hits especially because it was the first time Ghanaians were treated to a fusion of hi-life with the electric drums.It was a sensation and an ivorian producer Gibbs Doussou,on hearing the songs on air,flew to meet Alan in Accra and signed a distibution deal with him.Tano Records was the Label of the album. In 1987 he recorded the Album with `Accra Calling´ `Gumbe Dancing` etc with the production assistance of Micheal Karch of Polygram Hannover.On this album Alan played all the instruments himself apart from the horns.He also engaged in sound engineering.

The man wanted to explore higher musical horizons and not to compromise with a mainstream hype. In 1989 he met one Mike Stachella a music tutor and freelance journalist with NDR Germany.Together with some students of the University in Hildesheim they formed the FRONTLINE-REGGAE formation-BAMBAARA & THE SPECIAL REQUEST.a great Live act that performed in many shows and open-air festivals in the early 1990´s in germany and other european countries.

All around this time Alan kept his ROOTS alive and played in a DRUM and PERCUSSION group called AKUTU in Hannover.This was a multinational band. As a stage performer he made a big impact with his project BAMBAARA & THE SPECIAL REQUEST.With songs like `Abolish Apartheid Now`and `Mama we are living on the Frontline`.they did contribute a lot to preach anti -apartheid and Mandela-freedom. The band recorded their album`Fashion Philosophy` in 1993 under T-BWana records.Songs like `Unity is Energy`,Fashion Philosophy`and `Odo ka kyere me` did feature prominently on the GBC Television. Although ALAN COSMOS has been residing in Europe for over two decades his music pops up every now and then on the ghanaian music scene,his homecountry.

Now as a singer,multiinstrumentalist,bandleader, composer,and a COSMOPOLITAN artiste,he says his aim is to settle back home in ghana to continue his career and assist up and coming musicians.